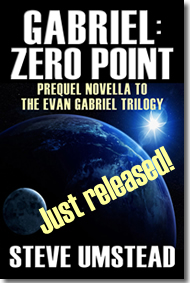 Steve Umstead wrote three books in the Gabriel, series but has now released this shortish Novella as a prequel to the three books.

I've read the first book in the series, Gabriel's Redemption and enjoyed it, see that review here ,  and fully intend to download and read the remaining books in the trilogy, but as always the TBR pile is rather large, so they are probably some way off, but then I saw mention of this one pop up on Twitter and so as it was a novella decided to take a punt on it.

So, Evan Gabriel has joined the navy after both his parents have died and his older brother has disappeared off world leaving him alone.  He then applies to become an officer and as we know from reading the first book in the series he is one tough soldier with enhanced neuretic implants.  Zero Point tells us how he came to be selected for Special Forces and how he was turned into a super soldier with the abilities that he has.

Pulled out for a transfer that he did not request, but accepts, transported to a lab and submerged unconscious for 22 hours while nano probes enhance his body he comes to in the empty lab with a blood trail but no bodies.... still trying to orient himself to his situation he finds that he is fighting for his life, the enemy have guns, grenades and body armour, he has managed to get his socks on and ..........

Umstead is a SyFy writer who writes, or so it seems to me, with some clarity; in that his prose flows seamlessly along without the uncomfortable trap that many of his contemporaries fall into.  By that I mean that many SyFy writers out there seem to feel that there is a need, as they are writing about 'off world' existences and other planets, that they have to make up the most complicated language and names for people and technology, it is of course needed in some stories, particularly if you have created a whole new species, but still!

I don't know about others but when I am reading, the words are actually being spoken aloud in my head by my brain and while Ishbel sitting opposite me on the sofa clearly can't hear me, I can hear them, and so when reading to myself and I find that suddenly I am stumbling over another made up foreign name or word, it can be more than slightly off putting as well as irritating, Umstead doesn't do that [much] - he writes in good old fashioned English without, I suppose, feeling the need to complicate the language, which makes for a flowing narrative....

A good read and good value for the money and, I am sure,  a good addition to the first three books.