There is a debate going on now since it has been discovered, under a freedom of information act request, that prior to the 2011 riots in London and other cities that the Met Police had 700 Baton Rounds in stock at the time of the riots but that they now have over 10,000 in stock ready for deployment.

Just watching the news a variety of people have been paraded stating that this is a horrendous piece of news and that the rounds should never be deployed on the streets of Britain.  One of the cases cited was the death of an 12 year old  in Northern Ireland who died a few days after been hit by a round during the 'troubles'.

But interestingly if you look at the quote from Wikipedia below, you will see that over 8 years 42,000 rounds were used and fourteen deaths were reported.  I am not going to enter into the rights and wrongs of the use or misuse during that period but 14 out of 42000 is not a 'high' percentage, a fatality rate of 0.03%.  Again, any death is tragic, but if you are putting lives at risk by throwing petrol bombs, why should you not run the risk of death too?


The British Government pioneered the use of plastic bullets. Used extensively in Northern Ireland, it was discovered they were lethal at certain ranges.[11]
From 1973 to 1981, over 42,000 plastic bullets were fired in Northern Ireland. Fourteen people were killed by plastic bullet impacts, including nine children. Most of the deaths were allegedly[12][13][14] caused by the British security services misusing the weapon, firing at close range and at chest or head level rather than targeting below the waist.
One of the victims, 12-year-old Carol Ann Kelly from Twinbrook in west Belfast died on 22 May, having been struck by a plastic bullet fired by a member of the Royal Fusiliers on 19 May 1981.[15][16] These concerns led to campaigners such as Emma Groves founding the United Campaign Against Plastic Bullets, to call for tighter immediate controls on their use, more accountability after such shootings and even a total ban on their use in Northern Ireland.
The latest variant of the L5 PBR—the L5A7—was introduced in 1994 along with a new more accurate launcher, the HK L104 riot gun. The L5 was followed by the L21A1 in 2001. The L21 PBR is fired from a rifled weapon which gives greater accuracy when used with an optical sight.[7] The L21 was replaced by the Attenuated Energy Projectile in June 2005.[17]

The full article from Wikipedia is here

And while the death of a 12 year old is a tragic outcome, it would be more even handed if they also told us how many rounds had been fired during that incident and how many people had been hit by the rounds?  It is also true as well that since the deployment of the rounds in Ireland, that the launcher has been improved for better accuracy, and better training is given to officers in their use; and lets not forget it is highly unlikely that any Police Officer armed with a weapon firing live ammunition or Baton Rounds, goes out wishing to be the one who has to actually pull the trigger and be the cause or be responsible for the death of anyone. 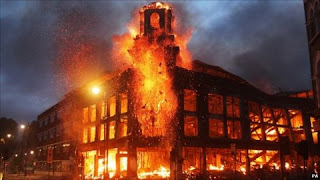 Are the people who are opposed to the deployment of these rounds, serious in their belief that people rioting on our streets, as they were last year, burning down shops, factories and homes and throwing petrol bombs at the police should be allowed to do so without a robust response in dealing with it and using any and all legitimate means to bring the disorder under control? 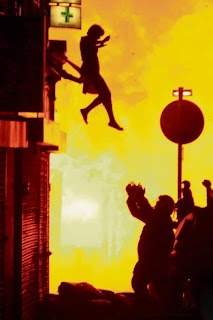 I have said it time after time in various posts, I AM NOT OPPOSED TO LEGITIMATE AND PEACEFUL PROTEST. But what I am opposed to are peaceful protests that turn into a riotous out of control mob, lobbing bricks and petrol bombs at police officers and property.  I don't care what their gripe is with the authorities you do not organise a protest or a rally and then let it turn into a mob.  And if it does and you then become, inadvertently, part of that mob, because it has been hijacked by a minority, then it is your civil duty to, a) remove yourself by the quickest means from the mob, and b) report anyone you know who became part of the mob and incited and inflamed the protest / rally into becoming the mob.

By removing yourself from the mob this will then leave the police to deal with them, and you will be safe!

The Police, as far as I am concerned are quite entitled to protect themselves and property by then taking appropriate measures. If those measures include the deployment of Baton Rounds then so be it.  If during the course of the then 'riot' someone is hit by a Baton Round and that prevents them from causing further harm to officers or innocent members of the public and prevents another building, business or home being burnt to the ground, then I have no problem with that.  Yes, it will and would be unfortunate if anyone taking part subsequently dies as a result of being hit by one of these rounds, but by throwing missiles and petrol bombs you reap what you sow!

Riot images courtesy here
News articles on the story - The Guardian
- The BBC
Posted by Unknown at 23:57