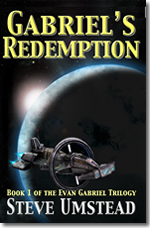 I have been threatening to read one of Steve Umstead's books for some time now but kept putting it off.  The reason I was putting it off was that I had recently got back into the science fiction genre through two other Indie authors and whose books I really really enjoyed and then I read another one recently that left me largely disappointed, and that's the thing with a particular genre it is either good or very bad not really much of an in between ground to rest on.

So after reading the bad one I was again reluctant to pick up another author that I hadn't visited before, but I did with this one and was pleasantly pleased that it was not at all unsatisfying.

Gabriel's Redemption tell us the story of Commander Evan GABRIEL from the NAF, North American Federation, which comprises America, Canada, Cuba and Mexico and is head quartered in Toronto after most of the seaboard states have been swept away.   The South American Federation largely made up of Brasil and Argentina after that continent is blown apart by nuclear war is a bit player with ambitions.  GABRIEL is on the run, just because he doesn't want to be found,  and hiding out in flea bit hotel in Jamaica after  being dishonourably discharged when an off world mission on 'Eden' goes horribly wrong and he is the only survivor.  We don't get to learn to much about this previous mission, which maybe we could have done as it left a big gap in the character of the 'hero' (but I think that it may be covered in book two of the series looking at the teaser at the end of this one, still...)

Setting aside the 'Eden' question for a moment, Gabriel is recalled by an old commander and fed a story whereby he needs GABRIEL's special skills to lead another off world mission to close down a planet which is producing the latest high tech drug.  A drug that in it's production, an indigenous life form on another planet is being subjected to barbaric torturous methods to remove the gland needed to produce it.  It is difficult to write to much about the plot as spoilers are all to easy to give away the story.

Humans of the future have been surgically enhanced with neuretic enhancements allowing them to receive and respond to information, and holographic messaging in their minds eye, cool, I like that and it gives them the ability to intercept and decode messages, open doors, arm  weapons, all sorts of cool stuff.

The book offered a lot but didn't deliver as much as it offered in the main because the calamity of the 'EDEN' mission hung over the whole book like an unanswered question.  SANTANDER, the main protagonist, who we sort of saw was going to be the baddy from something we had hinted to us, turned out to be that baddy after all , but, then when we did learn that he was the baddy from that excursion we didn't learn about, it was dropped like a hot potato (mind you to then tell us about it in detail at that juncture would have taken the story off tack, so... )

It will al become clear and hopefully you will see what I mean WHEN you read the book.  Yes I am saying read the book, as apart from that one glitch (my view)  it is a good story and although there is not much action to talk about, I do like my action and the bloodier the better, the book is one of those that simmers just below boiling point.

Umstead has an easy flowing writing style and I think there are nods in there to other syfy such as Star Trek, remember the Kobiashi Maru, the ship where Kirk cheated, there's a ship in this called the Maru and a couple of other references to other syfy  shows and books as well.

The narrative flowed along seamlessly between Gabriel and his team being put together and their time between Earth and the target planet and between them and the main off world protagonist, and I have classified this under Science Fiction and Thriller, but I hope that book two doesn't take quite as long to get to the action and become a proper thriller.

Even although I have a few criticisms of it I can always tell how much I enjoyed a book by the time it takes me to read it, and that time is precious to me so if I pick up a book and I keep putting it down and going back to it over a few weeks, while I might like it (and I've bought it so I am darn well going to finish it) it's not the same as really enjoying a book enough to read over a couple of days.  I started this one on Thursday evening and completed it today, so definitely worth a read.

And as to my critique over the unanswered question of Eden I picked up in this plot style in another book recently and the author came back to me and said that 'You have to remember that this is the first in a series and so it will be developed on in the next instalments.' fair comment, not sure, I just don't like it where the emphasis is placed on something so heavily but it is really left hanging in the air.... But that might just be me.