Had a look in the fridge as wasn't sure what I was going to make and found some bacon, and chicken breasts that needed to be used.  There was also some baby leaks that I had been saving for some leak and potato soup and of course some blue cheese left over from Christmas, but still in 'good nick' as we say over here... so what to do with it. 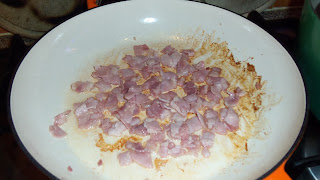 Then I trimmed and blanched off the leaks and added them to the pan, I just kept these whole but usually I would chop them down, doesn't really matter though..... 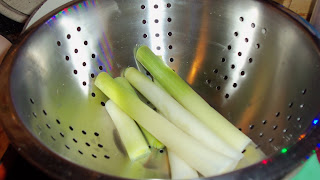 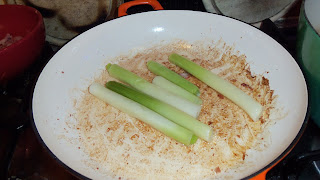 Once the leaks have slightly browned remove from the heat and keep warm with the already browned bacon bits. 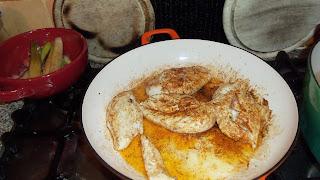 Fry off the chicken breasts, remember to make sure that these are cooked through completely. 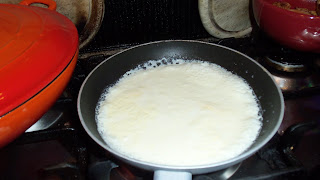 While you are doing that take a non stick pan and add the double cream (for 2 I used a 250Ml tub)  and gently bring to the simmer. As it comes to the simmer the cream will start to change from a milky white to a Creme Broulee ish sort of colour.

At this point put the leaks and bacon back into the pan and cover with a lid to keep the heat in, keep on a low heat. 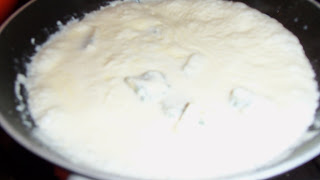 Add the chopped blue cheese to the cream and stir continuously while the cheese melts into and is absorbed by the cream. Once melted continue to stir and reduce the heat the sauce will take on a rich smooth consistency, taste, add more cheese if required.  Remove from heat. 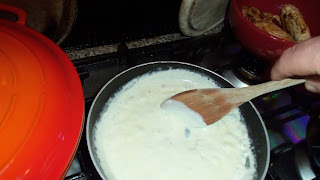 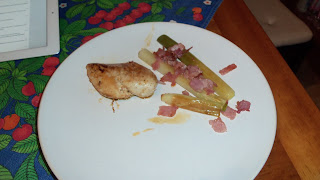 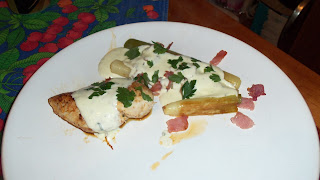 Plate up chicken and leaks and pour the sauce over it.  I did this with no potatoes for me but with a couple of  boiled and tender Charlotte potatoes for Ishbel (who by the way, cannot abide the smell or taste of blue cheese if served with biscuits and port )


Now as I write this I have just said to Ishbel that I am thinking of doing chicken again today, we do like chicken and fish and red meat.... don't judge.

Me;    'Thinking of making a buttery herb patty with tarragon and lemon thyme and stuffing this into a slit in the breast, Wrapping them in oven paper and putting into the steamer which will have rice in coconut milk underneath it and a bit of stock and a few vegetables.  The rice will cook and steam the chicken at the same time, what do you think?

Oh! I was also thinking of some short crust pastry topped with strawberries, blueberries and raspberries and some sugar baked off in the oven and served with some creme fraiche


Me: Well that's what I was thinking of doing ..... but I may just go to the chippy for fish and chips!