Missy Stronach went for her Saturday morning bathe, yes I do believe she bathes on other days too as sometimes when I face time her from the office and maybe it is getting close to lunchtime she is still in her goonie (dressing gown for the more discerning of you) or wrapped in a couple of towels, yes I know lunch time but what can one do or say .....

Anyway as she went for her morning bathe I went for my morning walk.  While out walking I was thinking of what I could do for Saturday Lunch which invariably turns out to be a late one and into an early dinner, but there you go.

I had a plan and had a look round the shops as I wanted some nice chicken thighs on the bone and with skin, some asparagus and some good seedless oranges but alas couldn't find anything decent in any of the shops or the market.

On the way home I bumped into 83 year old Mrs Pearce who was, quite rightly going off on one at the cars parked on pavements in the area, so I shall do a blog on that later.

I then bumped into 76 year old Alan who gave me a graphic description of his knee and thigh problems including the fact that he had just had the kneecap on his left leg 'washed out' don't know what was wrong but it sounded painful  but the thing is that both Alan and Mrs Pearce are still highly active and are out and about in the village and trying to keep busy, in fact Alan had just been to the motor factors and bought some brake pads for his large 4 x 4 that HE was just going to change......

Anyway, got home and Missy was out of the bath, I had been out two hours, and was 'putting her face on' I really don't like to see her without it, reminds me of a George Romero zombie, but who am I to judge (I will suffer for this later no doubt) and there we were then sitting at the kitchen table and I say,

Ishbel, "Why" (We really don't purchase much from supermarkets)

Me, " Iwas thinking of getting some chicken thighs and doing a spicy marinade for them and then to serve them up with some griddled asparagus (no bloody ketchup Jules) with orange quarters sprinkled with brown/demera sugar and grilled, with maybe a broad bean and bacon salad"

Me, "in fact I think I've changed my mind, how about fish fingers beans and chips"

WHaaaaaaaat was that look for, honestly I have no idea.

So this is what I eventually made for Missy Stronach: 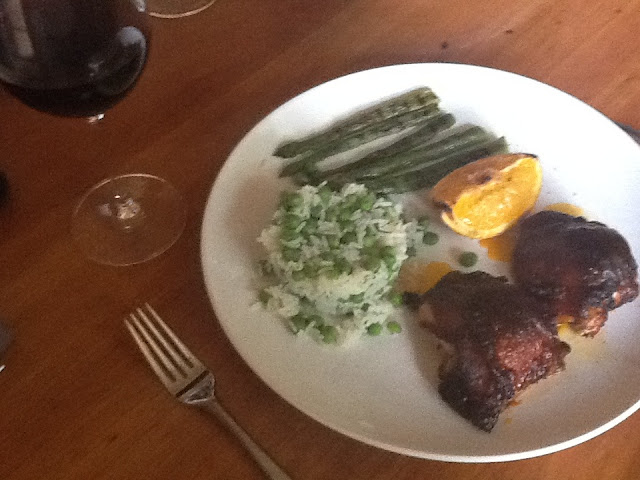