Well, went to hospital last night and had a CAT scan and today had a gastroscopy. Had to wait for about an hour and a half for the young doctor to then come and see me. I knew there was something up looking at his glum expression and then he paused and hesitated when we had sat ourselves down in the consulting room off the recovery room. "Well, is it bad news"? I asked He still looked glum and hesitant so with my best smokers smile I said, "what's the problem then, don't hang about I've taken the day off and the sun is still shining out there and anyway, it's my bad news and not yours, so let's get it over with.

As you know I have been feeling a bit lifeless for the last couple of months but in all truth I have actually been feeling much better over the last week or so and again I thought it was nothing more than a sliding hiatus hernia, bloody uncomfortable, but manageable and that was the point of the camera down the gagging throat today.

As it turns out there is a hernia, but, "We have another problem" says he. We won't fully know until we get the results of the biopsy and then we will arrange a multi discipline consultation (what the F... Is one of those - I didn't ask - which got me into more trouble from Ishbel) but in the meantime we are organising a full MRI and another CAT scan. You may need to start a course of chemotherapy but we will sort all that out on your next consultation"

"Any questions"? Says he
"Well yes" says I and he looks expectantly at me and I say. "I've been in here all morning, any chance of a fag break"?

I know, I know, but what can one say to the above, he says there is something wrong with me. I ask if I am going to die and will it be a painful death, he looks glum and I again say what are you looking so glum for, it's not you with the problem and anyway the bottom line is that yes I may have a serious life threatening illness/disease that has no doubt come about by being a fat git who smokes, has asthma, a touch of arthritis and who's idea of exercise is walking to the kitchen to make a coffee and then of course there is the final point that until we get the results of the biopsy we don't really know what the extent of the problem is ..... So no point in worrying at all, is there?  Mind you if he can't tell me what is actually wrong with me, and I never thought about it until I was lugging the tonne of medicine and energy drinks home from the pharmacy, what the hell did he give me it for, just a thought, but they were all very attentive and nice and I did get a wee packet of ginger nut biscuits with a coffee while in the recovery room, so that was a result.... If you've never dipped a ginger nut biscuit in your coffee you haven't lived

Oh, and if it does turn out to be bad news I've told Ishbel that if she continues to put plastic in with the normal waste and not in the non recyclable I will be back rattling the bins against the window at night haunting her until she learns to do it properly and another thing when I say it goes in the oven when the correct temperature is reached, WHEN THE LIGHT GOES OUT, that doesn't mean putting it in there just after you turn the oven on, otherwise I will come back and make sure all her food is burnt.... Loves ya babes
Posted by Unknown at 16:42 14 comments:

Well it's been about 9 weeks now since I have posted a blog or indeed visited any of the blogs that I support and for that I am truly sorry.  I have even been absent from twitter too and while not deliberately ignoring my many friends, casual and dear ones too, at least I was inclusive to everyone by not interacting.

Had a few health issues, still no idea what the root problem is, although I am scheduled for an MOT test at hospital tomorrow, but whatever it is it has left me feeling a bit blue.  Still am if truth be told, but as is the way with these things, you finally get an appointment and you start to feel a little better. 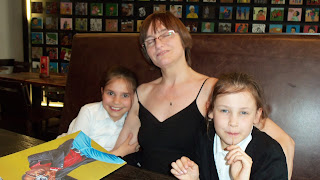 That feeling of well being was made even better by seeing Holly and Charlie the other week and then seeing Mollie, Shannon and Lacey Mae yesterday, collecting the first two from school and heading into Woking for a meal with them with 9 year Mollie, soon to be 10 (on Monday) reminding us so much of her Aunt Marie (takes charge and leads from the front) deciding which restaurant we were going to eat in and then marching us up and down streets to get to it......

And then even more amelioration from the blues at the hands and I do mean hands, of a couple of gorgeous young ladies, Rhiannon (for me) and Charlie (for Ishbel ),as I had booked a Spa day for both of us at Bannatyne Health and Fitness Club to celebrate our 37th Wedding Anniversary.

We were giving 15 minutes to relax in the relaxation and mood room which consisted of six heated tiled loungers in a mood lighted room with candles and soft relaxing music, and then we were shown into the massage room where Ishbel elected to have a head, face and neck massage from Charlie and poor Rhiannon was left to give me a head, shoulder, neck, back, arms and chest massage ..... our first massage and I can tell you Rhiannon used her elbows too and I have never felt so utterly relaxed in my life before it was just so wonderful and calming and I could feel the knots dissolving under her expert hands and this went on for about 45 minutes.

After this, and there was a variety of treatments to be had, including a chocolate massage, surprised that Ishbel didn't go for that, manicures, pedicures, all in all a pretty long list including a massage with hot stones. We then had a tour of the facility after which we were giving free range to use all of the equipment by just going back to reception and saying that we wanted to try out the equipment although Ishbel decided that she was going to try the x- trainer and spent a few minutes on one of them.  But the draw of the outside Jacuzzi was [roving too much for her and after 30 minutes in the indoor hot tub (they recommend 5) she spent 40 minutes in the out door one.  We then got dried off and changed and went for a wander round the rest of the facility watching people go through their paces, and it was quite busy for a Wednesday morning and there was a creche too for toddlers so there was a lot of ladies visiting the club.  After a light brunch in the cafe' bar it was back to the wet area, I had a swim and a sauna and Ishbel, guess where she was .............. 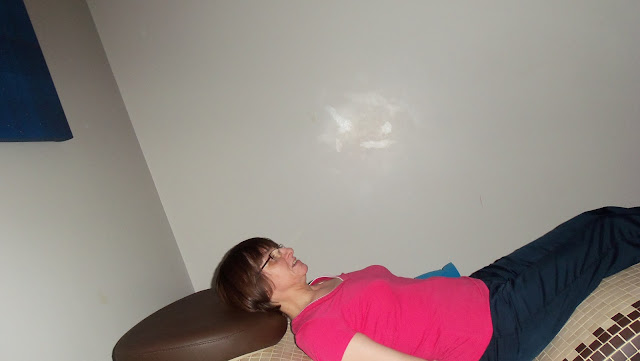 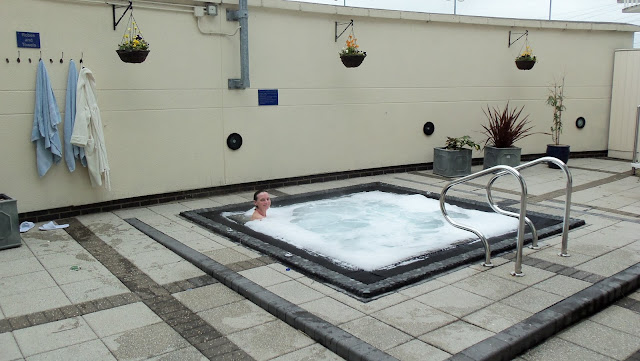 Apparently we are going back, no complaints from me on that .......... Bannatyne's Therapy staff looked after us and treated us well and for what we had and for the facilities you are allowed to use at a cost that was not going to break the bank - thanks folks particularly Charlie and Rhiannon for looking after us, hope to see you again soon.
Posted by Unknown at 15:45 7 comments: