Is it Me?  I noticed this in the Basildon Echo today and I got angry on two counts. An angry reader had written  to the paper to complain about receiving a parking ticket  while  parked at the hospital  in the wee small hours of the morning and the  'News' paper had given it prominence on their letters page with the bold headline ,

" Hospital's parking ticket at 3.20am is preying on the sick" 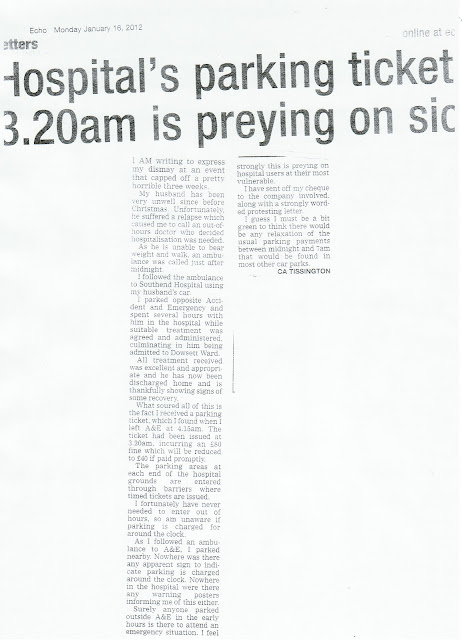 Now, don't get me wrong, every one has the right to complain, that's what I am doing here.  I am complaining about the author of the letter in the first place, who and while in difficult circumstance's, followed an ambulance carrying her sick husband to the hospital and then parked in the Accident and Emergency Zone and followed the ambulance crew and her husband into A & E and waited with him for a couple of hours while he waited and was then attended to!  A natural course of events in trying circumstances, BUT, and here is the rub, she does say in her letter that there are two parking areas, and she DID PARK IN THE A & E area.  Now we all know, or at least we should know, that the area outside any hospital A & E department is for the setting down of patients by ambulance crews and that if we all parked in there, at any time of the day or night, then it would become difficult if not impossible for ambulance crews to get their patient into the department.

And, while we have all railed against the obscene waiting times in most A & E departments when we have had the misfortune to turn up at one, in general, when a patient is brought in by an ambulance crew they tend to be seen rather more quickly than we, the walking wounded are ( and dependant of course on the nature of the illness or injury of the crew carried patient).  So, after following the ambulance to the hospital, seeing that her husband was being looked after, why did she not just move her car to a designated car park.  Yes, I know that some of you reading this will think that I am being unfair in my interpretation and that under the circumstances  the poor woman was more concerned about her husband than her car, and I do accept that as a fact. But, again having done what she did and then returned and found the parking ticket, is it not reasonable to assume that you would look at the ticket and think what money grabbing B*^%$*^ds  , and then have another rational thought and think to yourself, 'S*^t, I am parked in A & E, I should have moved the bloody car!

You might well go on to write a letter of complaint to the local rag about the injustice you feel about the situation, but would the family of a critically ill person be wrong to feel aggrieved at your inconsiderate parking if their loved one was deprived of a few minutes of time in a life or death situation as an ambulance crew fought their way through a row of parked cars, and this is where my second complaint lies, and it is this;

On receiving the letter from the disgruntled member of the public, and reading it, why then does the 'News Rag' publish it in the way that it has, giving it a prominence that it does not deserve.  Surely the so called 'intelligentsia' of the press know exactly why there are parking restrictions in front of an Accident and Emergency department and that parking by members of the public must be targeted in these locations, 24 hours a day, as I am sure like me, you too would always try and get as close to where you want to be, in terms of parking, and hope we get away with it, but then accept with annoyance at being caught, if we then get a ticket!

Yet, they publish the letter with the provocative headline to give it some semblance of credibility, why?  Crass sensationalism, of a petty complaint and justification by many as to why they do not take newspapers anymore.......