Book Review: Scarecrow and the Army of Thieves by Matthew Reilly 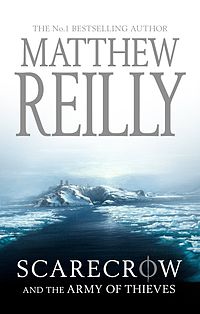 It's been a while since we saw Captain Shane Schofield, call sign Scarecrow, about seven years, and the question is, was it worth the wait?

OH MY FRIGGIN GOD YES IT WAS TRULY WORTH IT!


If you haven't discovered Matthew Reilly before, can I suggest that you do so, now, go on I'll wait here for you.  Pop off down to the local library and get his books out, or better still, if you are reading this, open up a new window in your browser and open up Amazon or Barnes and Noble or wherever it is you get your books or e-books from and make an order, you will not regret it, off you pop, but don't forget to pop back and read the rest of this....................

Reilly has a couple of heroes who he has written a series of books on and stand alone books as well.  Captain Shane Schofield, Scarecrow is a US Marine.  He was a pilot, but after being shot down and tortured, particularly around the eyes (ending his flying days) he retrained as a foot soldier and we met him in 3 previous full books and one short novella, the latter being the last outing for him in 2005.

Reilly, writes fast flowing, fairly short paragraphs, he needs to as so much is going on and you keep having to jump from what's happening with Scarecrow, his split up team, they always end getting split up, the baddies and some distant war room buried deep in the pentagon, who generally have lost the plot as even they find it hard to keep up with the action!

His prose is clear and precise, like a military briefing there is no ambiguity; If the bad-ass says he is going to enclose your best friends head in a box and place crazed rats in it to eat your best friends face off, that's then what you get and then described in 'exquisite' detail.

And that is just one of the things that happens in this most explosive of returns for Scarecrow.  Still badly mentally scarred from his previous missions and with a French Government Kill on sight bounty on his head, why, after all the French Aircraft carrier and it's crew were trying to kill him and his people, so he had to sink it with all hands lost, shit happens (that was a previous book), but in light of that bounty and doubts about his mental state, he had been sent to the Arctic circle with Gena 'Mother' Newman his Gunnery Sgt, call sign Motherfucker and a couple of deadbeat Marines to help and assist some civilian contractors testing new equipment.  Safe and out of the way at the top of the world. Sheesh, you'd think!

Back in the 'real' world a a new terrorist group has launched a series of devastating attacks across the world securing, arms, equipment and manpower. to what end, no one knows and Scarecrow and his team don't even know they exist.

Suddenly he gets a secure message giving him information and that information leads him to an old Soviet base close to where he is which has been taken over by the terrorists.  A navy seal team is on it's way and Scarecrow is ordered to follow them in and assist as the terrorists threaten the most terrible act to have ever been contemplated on mankind, and when you read it, it is believable...... can't say any more or it will give the story away....  but there is only 6 hours to save half the planet....

Now you just know that the Seals aren't going to get the job done and so Scarecrow, Motherfucker, 2 deadbeat marines and 4 civilians are gonna' have to save the day.  Now I should warn you here that young Mr Reilly is not afraid to inflict pain and injury on the good guys as well as the bad guys and he is not afraid to kill off central characters, some one very close to Scarecrow had her head chopped off by guillotine as a way to get at him in a previous book..... so be afraid as you are turning the pages on this one as you really don't know who is going to live or who is going to die and there are plenty of deaths and some surprisng survivals, some of which Reilly aficionado's certainly did not see coming......

6 hours to save the world, can they do it?  Four Marines and 4 civilians, oh, and Bertie, who was fantastic, but I am not going to tell you who or what Bertie is but he is central and keeps turning up like a lucky clover, thank god...... Oh and a French hit squad have turned up and are tracking Scarecrow, shit .....

it really deserves 100 rating for sheer edge of the seat excitement, but most reviews don't go that far

Email ThisBlogThis!Share to TwitterShare to FacebookShare to Pinterest
Labels: Matthew Reilly, Scarecrow and the Army of Thieves