The first was figures released under a 'Freedom of Information Act' request that show that Essex Firefighters have been ATTACKED 23 times between November 2010 and January 2012. 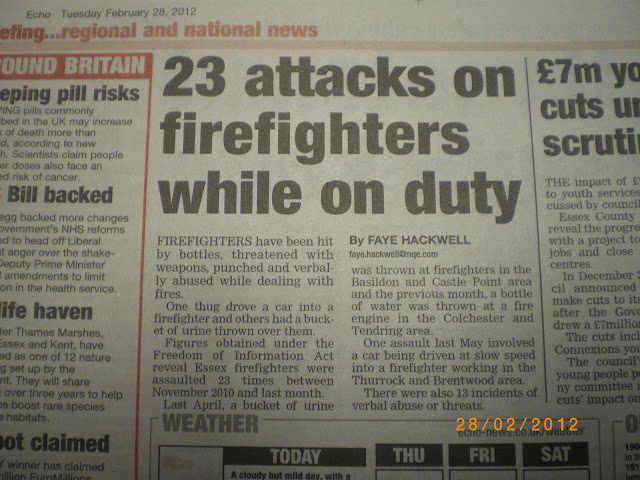 The first thing to ask about this report is, "What the f*%^ is going on, why are some people in society attacking firefighters at all?"

Surely there can be no reason on earth why people who have chosen to put their lives at risk in tackling fires and attending the most horrific crash scenes imaginable, with the resultant views of the dead and the dying, should be attacked by anyone at any time.....  I am at a complete loss to explain this, can you?

I have gone on the record in the past stating that all things being equal we would all live in a utopian society, where everyone was born equal and where we would all be gifted with the same level of intelligence as well as all the other gifts that such a society would bestow on us but, and it is a big but.  We don't live in such a society and not all people are equal in terms of intelligence or with the ability to determine even from the simplest right or wrong action, and clearly there are a number of moronic people living in the Essex area, and I am sure other parts of the country and indeed the world, who are so unintelligent or are so morally corrupt that they just do not see the stupidity of their actions.

Sure, we have all sat in front of the TV and witnessed images flashed to us from across the world where a demonstration has taken place and that demonstration, like so many of them, has resulted in violence and arson attacks and the demonstrators have attacked the fire crews and even ambulances going to the aid or assistance of the injured and the flaming car and buildings. Incomprehensible, but in the context of what is happening during these riots, you can see and vaguely understand why it is happening!

But Essex, or anywhere else in this country or the world, Why on earth would you attack a firefighter for attending an emergency near you?

And finally! Why does it need a request under the 'Freedom of Information Act' to get this information, are Essex County Fire and Rescue Services not reporting these incidents to the police at the time and are the police not asking for witnesses. And of course one way of asking for information is to release these incidents to the press! And are then the people who produce the Echo in Essex not doing their job at the time of the incidents, reporting them at the time to see if their readers can come forward with information that might lead to the arrest and conviction of these morons. Or is it a case of let's jazz this story up a little for the titillation of our readers who probably aren't very bright anyway.... just asking.

The second story to catch my eye was on Policewoman's Bra's!  Yes, bra's.

I know where you think this is going, but you will be completely wrong.  For those who know me, they will all know that I have been known to have a slight interest in matters Health and Safety, I can hear the groans now, but believe me people someone has to do it to look out for your safety as, sometimes you are all just a little bit silly when it comes to keeping you and yours safe, so, you need people like me and Andy Williams, no not the singer, but Andy, formerly of some outfit in South Africa but I think his over zealousness resulted in him being repatriated a few years ago to inflict pain and misery on our lives........,

Anyway, it is to the Basildon Echo once again we turn to for this wonderful piece of journalism that highlighted once again my lack of observational skills.

You see in my day to day life I have been known to sit with my thumb up my bum and my mind in neutral, day dreaming of what could be, if only I were rich and famous and not having to put up with tedious boring mundane life of the daily drudge of  9 to 5 worker that I have become.  A few months ago Essex Police (and I nearly did a blog on this but resisted the temptation) changed from white shirts and woolly jumpers to black T-shirts.  Today's article tells me that one un-named WPC states that if she is not wearing her 'stab vest' on top of this T-shirt she must wear a padded bra as the T-shirts are so tight that you can see her nipples.  Well I do meet a lot of Police officers from Essex in my daily wanderings and instead of concentrating on what they have been saying to me and looking at their faces when talking to me, I clearly should have been half paying attention to their utterances and looking at their nipples, I promise to do this in the future so that I can report back on the various sizes and colourisations of the  areola,  etc. But before I do that, can I be arrested for staring at a Police officers nipples, I wonder......

As to the safety aspect of the story, woman PC's have been told not to wear under wired bra's in case they are shot in the chest as the wire in the bra may cause more damage to them when hit by the bullet, I agree, sound health and safety advice at last....... 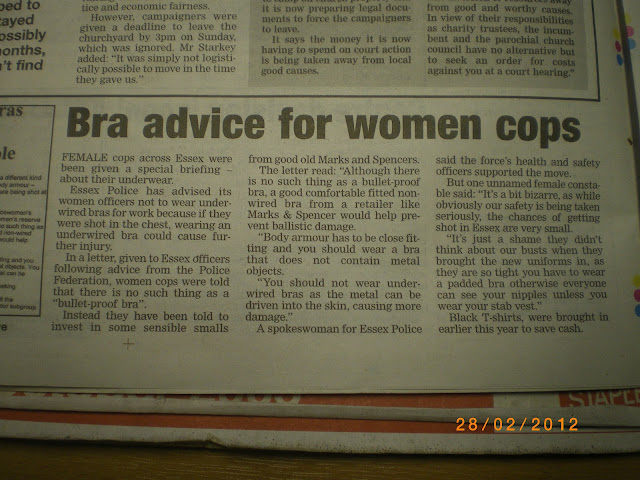