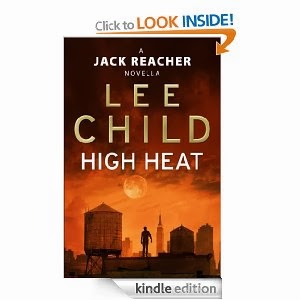 16 year old Reacher is on school holiday from South Korea and is passing through New York en route to visit his older brother who is a cadet at West Point Military Academy.

Even at 16, Reacher has already established a code of honour and conduct, and a guy slapping a woman on the face falls outside of what is permitted....

Reacher prevents the guy from doing any more harm to the woman and a night of cat and mouse with a local drug lord ensues although as usual Reacher, even at 16 is not the hunted but the hunter in the blacked out streets of New York dodging fires and looting as a city wide power cut takes affect.  In between making the drug lords life unbearable, he finds time to hook up with a co-ed a and is introduced to a special first time encounter in the front seat of a sports car and then to assist a suspended FBI agent with information on Son of Sam.

These occasional diversions by Child into Reachers past are as entertaining as the 'up to date' titles. They show us the boy who became a man growing up inside the Marine Corp and being enveloped by a system of honour and do right at all times, even if that means taking extreme actions to find a solution to a problem.  As long as the solution achieves the aim of winning the contest / solving the problem, then it is the correct way to go.......

There were a couple of small issues with the editing for the Kindle with extra spaces between words, but other than that no problems.