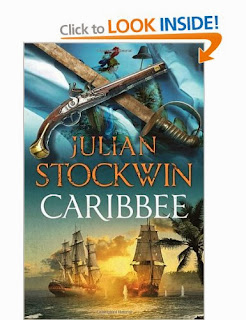 Number 14 in the Thomas Kydd series from Mr Stockwin detailing the life of 19th century Royal Navy mariners as they protect England and it's dominions from the threat of Napoleonic domination.
Caribbee sees Thomas Kydd and his Frigate L'Aurore dispatched from the successful but ill fated attack on Buenos Aries to the Caribbean to request a relief force.

On arrival, station Admiral Cochrane denies the request and informs Kydd that he and the Frigate L'Aurore are now under his command and that he and his crew will patrol the Caribbean to protect British interests from the French and Privateers!
With Napoleon issuing a decree that makes all trade with Britain and her colony's illegal the economic threat to Britain and the Crown is a crushing one and added to the threat of capture most trading and commerce is brought to a standstill.
Once again Stockwin draws us in to this 19th Century world and throws everything at us, from hanging on for dear life in a ship and soul destroying hurricane (chapter 7) where you end the chapter relieved but drained, to heart pounding chases of sighted enemy vessels, to formal dinners where upon at one it is revealed drunkenly in front of peers and local aristocrats of Kydd's humble and lowly beginnings ....  Can he recover his status after that
It is revealed that there may be a secret French base commanding ships and privateers in the local and Nicholas Renzi is firmly in the firing line after gathering information that leads to an attack by British forces only to find that there is no evidence that a base of operations ever existed.... Can Nicholas recover from the embarrassment of being a failed master spy too....
All in all another exiting read from a master storyteller and very much worth the annual wait for the next instalment
Editing for Kindle: Hardback 1st Edition
Reading Enjoyment: 5 out of 5
Plot: 5 out of 5
Overall Rating: 5 out of 5
Chapters: 13
Page length: 347 including authors note