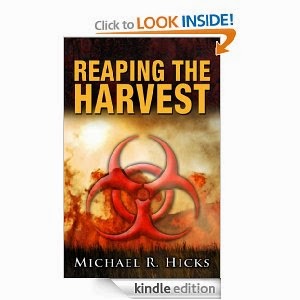 What can I say about Hick's 'Harvest' trilogy people, if you haven't read any of the three books, you really should, and he even makes it easy for you by giving the first book in the trilogy, 'Season of the Harvest' free across all e-book reader formats, so whatever you read on, there is no excuse.

Hicks weaves a tale of terror across these three books borne out of his mistrust of GMO's, or rather his mistrust of the self regulation of the companies behind GMO's as allowed by the US government.

An organism has been discovered by a few people that seems to have been around on planet earth for hundreds of years. It has achieved sentience and can mimic human form.  The organism believes that it is the ultimate life force on the planet and that human kind are nothing more than a food supply for them, but as yet and even after being around for lord knows how long, their numbers are too few to take what is rightfully theirs, the whole planet.

They devise a plan to genetically modify wheat that once ingested will wipe out the human population.

Once in human form the harvesters as we come to know them, are undetectable except for the insane frenzy that they send cats into when they come near them.  They kill by deploying a poisoned stinger from their bodies and they take the form of any human they kill with all the knowledge that the human possessed, after digesting the body.

Reaping the Harvest is a non stop blood bath from beginning to end with first the Russians nuking large parts of their own and adjoining countries, including Moscow and then the Americans doing the same to some of their own cities in a bid to slow down the spread of the larval harvesters.  These creatures have not and will not attain sentience, they only have one goal to consume anything in their path human or material, anything that is carbon based is digestible to them and as they eat, they multiply and there aren't enough high explosive rounds or bullets or manpower on the planet to stop them from spreading.... The age of the human is not just collapsing in on itself it is being consumed and it's final annihilation is only months away in this final book of the trilogy.

Can Jack Dawson and Naiomi Perrault find a solution that will slow their demise down and reverse it ......

Hicks has written a clever series here and joins up all the dots for all three books.  He writes well and gives you a story that is gripping as it is horrific but compels you to turn page after page......
Editing for Kindle:  5 out 5 Reading Enjoyment: 5 out of 5Plot: 5 out of 5Overall Rating: 5 out of 5Chapters: 43Page length: 373
Posted by Unknown at 21:47