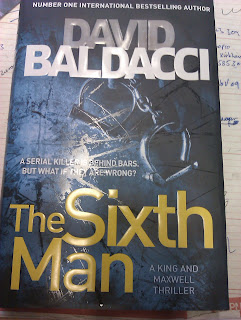 Michelle moved, but not quite fast enough.  The blow glanced across her forehead and dug into her ear.  She twisted sideways, found purchase on the asphalt path, pivoted, setting her weight on her right foot, and launched a kick to her attacker's left knee.

Michelle Maxwell loved attacking knees.  It was the largest joint in the body where four bones - the patella, the femur, the fibula, and the tibia - all came together like a highway interchange and were held together by an array of ligaments, muscles, and tendons.  It is one of the most intricate parts of the body and critical for mobility.

I heard an interview with David Baldacci on the BBC Breakfast recently and I thought his 'new' book sounds interesting.

I had previously seen his books as I browsed the shelves before but I never got round to actually picking one up for a flick through.  Having said that, on the strength of the interview I thought it might be worth a go.  Mr Baldacci seems to be a bit of a prolific author and "The Sixth Man" is No 5 in his King  and Maxwell series of books about the lives of two ex American Secret Service Agents, both of whom have been fired for losing the people they were protecting.

I have not read any of the previous novels and I may well do as I found that this was a good read.

A Good Read was what it was and there were many twists and turns.  The premise is that King and Maxwell start off to meet King's old college tutor, a lawyer who has asked for his help in a case.  On travelling to Maine they come across, in the middle of nowhere the lawyers car with his dead body still in it.

The case, Bergin, the lawyer was working on, was defending an Internal Revenue (Tax Man to us brits) man who had been charged with multiple murder , six bodies in his barn and he was standing over the grave with shovel in hand when the police conveniently arrived on the scene, guilty, no, but that is all I am going to tell you about that.

The plot moves between Maine, New York and Washington and a high Security Federal prison in the middle of nowhere.  It involves the head of Homeland Security, Private Security Contractors, Mercenaries, the FBI and the President.

The action was pretty fast paced and the whole structure of the book was well laid out, following one lead then another making it easy to keep up.  I really did enjoy it but, and this is only me of course, it was a book that has taken me two week to read.  That is not a criticism as the last two authors and whose books I read and who I know and love, Julian Stockwin and Michael R Hicks, I couldn't put their books down, once started, except for exhaustion.  Baldacci may well fit in to that category as I pick up more of his books in the future.

If you do buy this one, it will keep you on your toes and there are two completely unexpected exposes in the final chapters that had me shaking my head.  Completely unexpected but in the context of the story so perfectly addressed and revealed making you think to yourself, "Why the hell did I not see that coming", which made the two weeks entirely worthwhile.